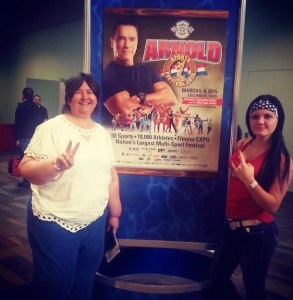 That’s the latest photo of me on the left giving the peace sign. I attended the Arnold with my daughter and granddaughter in March 2015, I remember when I first decided to go vegetarian. I asked my friends if they had ever seen an overweight vegetarian. I thought all vegetarians were skinny. I was so naive. I didn’t give a thought to junk food vegetarians. I had the image that a lot of people have that vegetarians eat rabbit food – carrots, lettuce, celery, things like that. Oh what a journey it has been! It is like stepping into a whole new world.

The reason I initially created Vegformation was to document my transformation from a junk food vegetarian to the WFPB (Whole Food Plant Based) lifestyle. The more I learn about the power of plant based foods, the more I want to learn and share with others like me who are struggling to overcome food addiction and heal their body of illness and disease.

My vegetarian journey began in 2010 with abscessed diverticulitis – a disease I had never heard of before it happened to me. I became deathly ill and had to have surgery to remove 18 inches of my large intestine. I spent a month in the hospital and six months with a colostomy bag while my colon healed. I was devastated, but still didn’t make the connection between meat and my condition. After surgery to reconnect my intestines, I went back to my old eating habits of highly processed junk food including meat, but this time, I noticed the immediate effects when I ate meat. I felt instantly sick and my stomach would get rock hard. Inflammation was out of control in my body. I swelled up to 325 lbs. I started researching causes of inflammation and discovered the work of T. Colin Campbell. That was when I made the connection of meat to ill health. Then I watched Earthlings and that was it. It was like turning on a light switch or a snap of fingers. I woke up and stopped eating meat. I cried like a baby when I watched that documentary because I just couldn’t believe that I never thought about what happened to the animals or where our meat comes from. I just trusted that the food providers had the consumers’ best interest in mind. Big mistake! Earthlings is nicknamed The Vegan Maker and I can see why.

Still I struggled to give up dairy, eggs and cheese. Cakes, cookies, candy, chips, pizza… it’s still a temptation to me. I’m not there yet, but I’m making progress. I’m learning to fuel my body with fruits and veggies as close to their natural form as I can get. When I do that, I’m not near as tempted to eat the junk food.

My vision is to overcome this half century of junk food addiction so I can live the abundant and energetic life that whole foods provide. I want to help as many people as I can along the way.